To develop an effective, climate-resilient, sustainable fishery management plan that balances conservation and utilization of marine resources over the short- and long-term, stakeholders first have to understand the potential climate change-driven impacts and challenges in their system. Doing so can help stakeholders to develop reasonable goals and benchmarks for management and facilitates adaptive progress toward these goals. Projecting future fishery conditions informs the thinking and decision-making at each subsequent step of the FISHE process.

To understand the potential influence of climate change on this hypothetical fishery the local managers, government representatives and fishing community collaboratively worked together to collect and combine information to develop a Climate Impacts Profile of the fishery. The results of this exercise then led them to complete a Climate Vulnerability Analysis on three of their most culturally and economically important fishery targets. Find more information on both of these assessment processes below:

Using expert knowledge of the local fishery and projected climate change impacts in the region and bordering countries from the literature, stakeholders were able to describe potential and likely changes in species mix, distribution, and abundance in their system. This climate-impact profile indicates that, in the short- to medium-term, all of the current fishery targets are projected to be less abundant in the nearshore waters because of climate change-associated habitat loss and shifts in water temperature and nutrient inputs. However, on the upside, emergent fisheries are also expected to begin appearing in the near-term (<5 years) and sustain into the long-term (>10 years).

Expected alterations to the physical environment include increases in water temperature and freshwater input from increased storm activity, resulting in substantial changes in salinity, temperature, pH and dissolved oxygen. These changes will affect both the biology and ecological interactions of the fished targets and associated species community; as well as the resilience of the ecosystem.

Likely fishery-relevant impacts of those changes:

The nearshore multispecies fishery targets species found in mangroves, seagrass beds and throughout the coral reef system. The majority of the targets include several species of groupers, snappers, grunts, jacks, wrasses, and sharks; all targeted with a set net. Based on the large range of life history strategies of the fished targets, and their use of all bodies of water: open ocean (within and outside the country’s jurisdiction), nearshore ecosystems (e.g., mangroves, seagrass beds and coral reefs) and local estuaries, there is a high likelihood that all will be influenced by climate change.

Brief Intro to the fisheries:

Local fishing communities’ fish year-round and fishing is currently the only source of protein and the only livelihood option in the area. Set nets are the main fishing gear, fishers move seasonally between ecosystems to encounter fish targets. All vessels are small, and the majority are wind powered. Fishing activities decrease during the stormy season, as it is not safe to travel on the ocean when swell or wind activity is substantial. Historically, these communities have experience with hurricanes and periodic decreases in fish availability; in most of these instances the communities utilize other fish resources that are not generally targeted.

Projected temperature/nutrient shifts in the waters of this region are expected to result in loss of habitat and a corresponding decrease in the abundance and presence of all targets in the shallow nearshore waters. In addition, potential shifts of groupers and snapper to deeper waters and movement of all targets towards sub-tropical waters outside the current range of the community fishing vessel capacity is projected.

A regional gyre system exists that brings sub-tropical waters and connects this island country to other countries. It is thus possible that species from sub-tropical neighboring regions may be able to establish in the waters of this island nation.

Potential metrics/ indicators of those changes and impacts:

Because the Climate Impact Profile indicated that local fishery target species will likely all be impacted by climate change, the stakeholders in this system decided to follow up with a more in-depth Climate Vulnerability Analysis (CVA) to help them understand which targets are the most vulnerable to climate-driven system changes. Doing so can help them to prioritize management resources, and better guide the design of climate impact data collection regimes.

Stakeholders decided to begin by applying the CVA to just 3 of their most valuable fishery targets which also have very different life-history characteristics:

They chose to apply the CVA at a regional scale comprising the Caribbean large marine ecosystem, which helps to capture key ocean climate dynamics and allows for inclusion of the full ranges of their target species, most of which have pan-Caribbean distributions.

After selecting a set of species and a scale for assessment of the CVA, the next step is to score a set of "Climate Exposure Factors" that characterize the climate-driven changes expected in this system. Twelve Climate Exposure Factors that are expected to be important in this region were selected based on the results of the Climate Impact Profile. Through a participatory process, the expected magnitude of change for each over the next 50 years compared to the past 50 years was given a score from low to very high. For example:

Next, stakeholders moved to the Sensitivity section of the CVA, wherein 12 pre-determined attributes that control a species' intrinsic sensitivity to climate changes are scored from low to very high. For example:

Completion of the full CVA for these three species generated the following results: 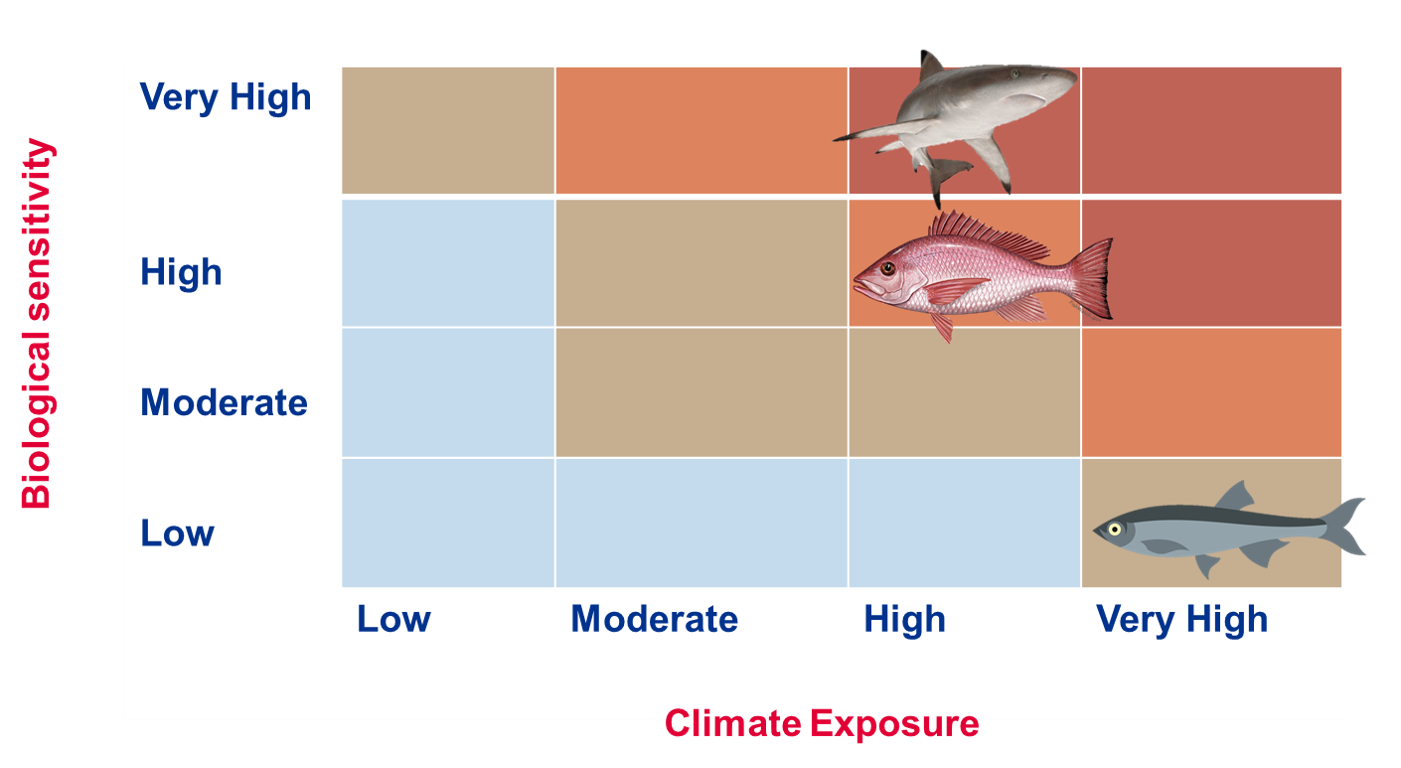 The final vulnerability score for each species shows that the reef shark and lane snapper have similar exposures to climate change because they share the same reef habitat that will see a high climate exposure. However, the shark’s biological traits make it more vulnerable to the impacts of those climate-driven changes than the snapper. It has a smaller population, it is slower-growing, has no larval dispersal, and lives in a narrower temperature range. The herring is even more exposed to climate change than the other two species because it lives in shallow, inshore waters where climate exposure is even higher than at the reef. However, its biological characteristics make it less vulnerable to climate-driven declines in population size. It is fast-growing, mobile, it has a larger initial population size and a relatively simple reproductive strategy.

Thus, the reef shark has the highest overall climate vulnerability score, while the herring has the lowest score. Given this information, stakeholders in this system may choose to prioritize development of a climate impacts monitoring regime for the reef shark, and may also choose to make some precautionary management decisions, like reducing fishing pressure on this species, that might increase its resilience to the coming changes.