To manage a fishery, we need to know how it is doing with respect to the fishery sustainability and climate resilience goals; in other words, we need performance indicators (PIs) that can be measured. And there is no point in measuring these performance indicators if we can’t tell what the results of our measurements mean: is this level of the performance indicator that we find “good” or “bad” for the fishery? Are we on track toward achieving fishery management goals or not? We therefore also need reference points (RPs) against which to judge the current status of each of our PIs. Reference points can be “targets” (values we are aiming to hit or stay near), or they can be “limits” (values we are aiming to avoid hitting or passing), but in either case the key function of the RP is to tell us when we need to take a management action to ensure we are moving towards the desired system state. Reference points can be based on the literature, for example, if there is a certain ratio of current stock size to unfished stock size that is known to indicate the stock is in good health. But RPs can also be stakeholder-generated, based on agreed-upon goals or values. For example, it is common to set a target fishing mortality rate RP at a level that’s equivalent to the species natural mortality rate (i.e., F = M), however a participatory process may result in an agreed upon target RP of having the fishing rate be 0.6 or less of the species’ natural mortality rate if stakeholders wish to be precautionary in light of climate change-driven uncertainty around stock productivity levels.

The right performance indicators (PIs) for a given fishery will depend on the fishery management goals (i.e., what outcomes you are hoping to be moving toward) as well as on the available data (which will determine whether the PI can be evaluated and the types of assessment methods that can be applied). Ideally, several PIs will be identified for each of the Fishery Sustainability and Climate Resilience Goals that can be evaluated with independent data streams so that they can be used to corroborate each other and reduce uncertainty about the status of the fishery. Table 1 provides some examples of common performance indicators that might be used to track progress toward specific goals.

For step-by-step guidance on choosing the appropriate PIs for your fishery, see the Guidance document for choosing PIs, identifying RPs, and defining HCRs in the downloadable Workbook.

Once a set of PIs have been selected that can tell us how we’re doing at meeting our goals, we’ll identify appropriate Reference Points (RPs) against which to compare them, determine some Harvest Control Rules (HCRs) to dictate our choices once our PI measurements come in (Step 8), and then select and conduct the appropriate assessments to confidently measure those PIs given the data we have available (Step 9).

It’s important to think critically about the life history of your target species when selecting PIs and RPs.  Many PIs for stock status are based on an assumption that the species grows steadily throughout its life.  However, many common fishery targets like crustaceans grow episodically, between molts.  Other PIs are based on the idea that if spawning stock is preserved, stock status can be maintained. While this is true of most finfish, some species of finfish and many types of invertebrates like squid and octopus spawn only once and die, meaning that it is probably more important to protect juveniles from fishing pressure so they can mature and spawn than to protect adults after they spawn.

To give the performance indicators meaning and use them for management, we need targets and limits for each one. These are often called Reference Points (RPs). For some types of species and some PIs, there are commonly used RPs that are generally associated with sustainable fishing or a healthy stock. For other PIs or species types, stakeholders may have to determine their own RPs that are appropriate for their own goals and species life history characteristics. Table 2 provides some example target and limit RPs for some common PIs. The specific RP levels will depend on the species you are managing and the goals of the fishery.

For step-by-step guidance on identifying the appropriate RPs for your fishery, see the Guidance document for choosing PIs, identifying RPs, and defining HCRs in the downloadable workbook.

RPs intended to serve as targets and limits for the productivity or reproductive capacity of a stock vary widely across species, according to life history characteristics.  For example, an SPR (Spawning Potential Ratio) of 35% is a commonly used target RP for finfish.  But since many invertebrate species are highly productive, it may make sense to set a lower SPR target to allow for more fishing opportunity without reducing the capacity of the stock to recover from fishing mortality. 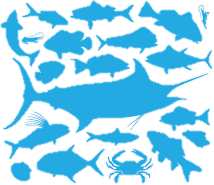 If you are using management baskets to help avoid serial depletion in a multispecies fishery, from this point in the FISHE process only the representative species from each basket will be examined. This means that extreme care must be taken when selecting Performance Indicators (PIs) as well as corresponding Reference Points (RPs), and when interpreting the results of the assessments (Step 9 and 10).

After PIs have been selected based on goals and data available, ask yourself if trends in the data for the representative species on each PI are likely to characterize/ represent trends for the other species in the basket. In other words, will the various factors (e.g. fishing rate, gear used, etc.) influence all species in the basket in the same way they influence the representative species? Or is there some characteristic of the other species that makes it different, such that a given PI result will not mean the same thing as it does for the representative species? It may be necessary to consult with scientists, the fishermen, or other system experts to find answers to these questions.

In some cases, a given PI may be suitable for all species in a basket, but different RPs may be appropriate for some species. For example, if Spawning Potential Ratio (SPR) is the selected PI, the appropriate target RP may be 0.20 for fast growing species, and 0.40 for slow growing species. Thus, if a given management basket contains species with a wide range of growth rates managers must be careful to choose an RP for analysis that doesn’t put the slower growing species at risk, even if the representative species has a faster growth rate. In this example, an RP of 0.40 can be selected (regardless of the growth rate of the representative species) to be precautionary, or if managers have a slightly higher risk-tolerance, an RP of 0.30 could be selected as a mid-point between the fast and slow growing species’ SPR targets.

Finally, as described above in Step 6, we highly recommend considering species’ vulnerability to climate change, in addition to their current status and vulnerability to the fishery, when selecting representative species. Species that are especially vulnerable to climate change should be monitored against climate-relevant PIs and RPs to identify if and when climate-driven impacts begin to manifest. This means that some management baskets may have two different species being monitored and assessed against different types of PIs (for Fishery Sustainability or Climate Resilience), or that one species may be evaluated against both types at the same time. Information on climate resilience PIs can be used to trigger new management actions or stakeholder decisions, such as when to begin investing in infrastructure that supports fisher adaptability.